I have recently returned to life in the USA after a two year stint living in London. I loved London. Life felt more manageable there compared to the hectic hubbub of New York City and I had all of  Europe in my backyard. I took advantage of this...and more than just Europe. In two years, I set foot in 23 different countries, many more cities and made sure to eat my way through all these new lands. One thing I missed the most about the States, about NY...and about some of my favorite American cities, LA and Austin and San Francisco, was TACOS.

Apparently Mexican cuisine exists in London. I had my fare share of “Mexican style” food, but I missed the true true warm-tortilla-sizzling-meat-oil-and-toppings-dripping-out-the-back-end-of-the tortilla-all-over-my-hands tacos that I have come to adore in my taco eating adventures.

So once happily back in the Big Apple, my friend, Harry, suggested that we catch up over tacos and tequila. Music to my ears. Plus, we were both free on a Tuesday so TACO TUESDAY was set on the calendar. He suggested we tour some taco spots from the West Village up to Chelsea Market. I loved the idea!

As we sat down for our first taco, and my first indulgence since re-residing in NYC, I mentioned to Harry how exciting a moment this was, personally and “professionally” for Blocho’s Tacos. He looked at me perplexed.
“Harry, don’t you know I used to blog about tacos?”
“What? No….”
“Oh my God. How long have you known me? Tacos are my favorite food. I’ve reviewed the tacos here.’
[We were sitting at the bar at Empellon Taqueria]
“How have we not done this before?”
“I do not know. But we’re here now. Cheers.”

Apparently my taco obsession is not as public as I thought!
I gave Harry a play-by-play of how this came to be, shared some of my taco highlights, and even disclosed a new nickname that I developed at business school due to my taco love -- Chipotle.

With new information and a deeper sense of the importance of the night, our taco tour began.

We used a Taco Tour Scorecard that Harry had used during his trip to Mexico City and decided to rate each taco on the following 7 criterion: 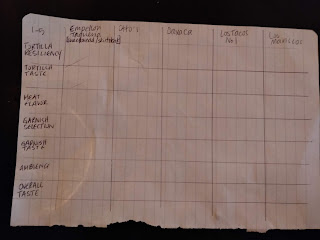 With each taco, came a score, a comparison, and then at the end (hopefully) a winner.

We considered adding in a spontaneous stop at Macondo West, but ½ way through and nearly full, we benched this (and Oaxaca) for Tour #2.

Empellon Taqueria
I think I’m beyond counting the number of times I’ve dined at Empellon. First reviewed in 2011, this spot has always been a favorite of mine for a few reasons. It’s a great location and in the restaurant business, it is all about LOCATION, LOCATION, LOCATION. I think the chips and guacamole that come with the two salsas (especially the cashew salsa) are splendid. Plus, they often have early-ish (6:30pm) reservations available on OpenTable.
Since we were on a tight schedule, we opted for a seat at the bar and quickly decided on two tacos each -- the Tuesday special, sweetbreads, and the skirt steak with onions tacos. Although the bartender recommended the very popular pastrami taco, we wanted to keep things (somewhat) classic to maintain a level of consistency throughout the night.

The tacos arrived and looked delectable. Choosing to indulge first in the sweetbreads, I took my first bite and a siren went off in my head. These tortillas are bland and doughy and…..GASP….they are flour tortillas! Also, the sweetbreads were very very fried. So much so that I could have been eating fried shoe leather. Was it really sweetbreads? I don’t know. 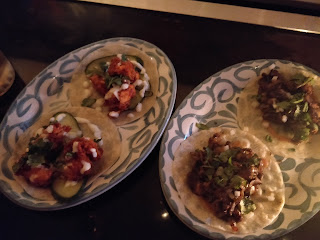 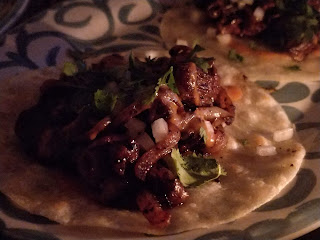 I was excited for the nuance and indulgence that a sweetbread taco would bring. It harkened back to the days of Empellon’s bone marrow taco. But, alas, it was just some fried stuff in a flour tortilla. For being on the more upscale end of the taco / Mexican establishments in New York City, I was disappointed with this daily special.

On to the steak.
The heinous crime of the flour tortilla persisted, so I grabbed my fork and went meat and toppings only. The onion slices were a bit big and unwieldy making me wonder how this taco could be gracefully consumed in taco-form, rather than with fork and knife. But the steak was tasty. It had that delicious meaty umami flavor and was perfectly juicy and tender. I could have dumped these taco fillings on a salad and been very content. 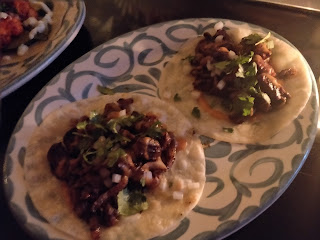 As we wrapped up at Empellon, I asked the bartender what the deal was with the flour tortillas. It’s just not authentic. His take: “I like the flour tortillas because I don't think the tortilla is the star”. Fair point, but I strongly disagree. The tortilla does not need to be the star, and probably shouldn’t be, but it needs to support and uplift the flavors of the fillings. This is why I love when a restaurant makes their own tortillas and selects the corn blends for each taco. Have you had blue corn tortillas? Exactly.

On to our second stop, just across the street, Otto’s Tacos.

Popular posts from this blog

- October 01, 2018
The much anticipated PART THREE. Los Tacos No. 1 The energy at LTNO is great. You order at the cashier and then stand at the counter waiting for them to call your name and having the opportunity to personalize your taco with toppings. The line move relatively quickly and the staff is friendly. We ordered the chicken tacos and tacos al pastor (the al pastor does not appear on the menu but it is available!). Shortly after ordering, our tacos were presented and I bit into the chicken taco. I chewed. I waited. Was I dreaming? Had I actually put food in my mouth? The chicken was flavorless. I could not distinguish between meat and tortilla and toppings. It was empty calories. With very little spice or flavor of any sort, I tried to doctor up my taco with salsa and lime and then I realized I was eating salsa and lime wrapped in a semi-spongy tortilla. I was disappointed. Thinking maybe I ordered incorrectly, I moved on to the Al Pastor taco feeling nervous and exciting for this “off
Read more

Tacos. I love them. Cleanses. I love them. (Yep, I do.) Yoga. I love it. After leaving one of the best yoga classes I've taken at Om Factory - Fashion District, I checked my phone and had a message waiting from my sister.  No words.  Just a link. This link. http://greatideas.people.com/2016/01/06/taco-cleanse-yoga-poses/ I knew this would be epic.  Taco cleanse yoga poses?  There was nothing in the URL that I didn't like.  A taco cleanse may seem like the opposite of the ever popular juice cleanse, but isn't there something to be said for changing up our routines? Salivating over the idea of eating tacos post-yoga, I quickly learned about the book The Taco Cleanse  (I will be starting my cleanse on Cinco de Mayo, of course) and the hilarious Taco Yoga Poses below. From The Taco Cleanse  and http://greatideas.people.com/2016/01/06/taco-cleanse-yoga-poses/ The brilliant minds behind this cleanse and detoxifying yogic culinary experience are my heroes.
Read more 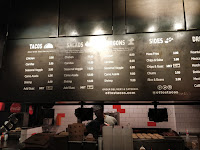 Part Two. Otto’s Tacos As we entered Otto’s Tacos, I quickly realized that our extremely scientific taco taste test methodology was flawed. We did not agree on a standardized taco flavor to try at every spot therefore committing to comparing apples to oranges to chorizo to pollo. Also, the type of taco (sit down restaurant vs fast casual) was also mis-matched. However, I bit my tongue and pushed onwards still excited for the plethora of tacos I had in my future. At Otto’s we were greeted by Maggie, the cheerful woman behind the counter, who was busy entering take out and delivery orders, much to her chagrin, and by the time she was ready for our order was flustered but appeasing. We wanted to take advantage of the taco + a beer deal, but rather than order a beer, I wanted a horchata. She said she couldn’t do the official swap, but could throw in the Horchata if we tipped her. So #winning. Maggie! We ordered the special of the day - a crispy short rib taco and th
Read more